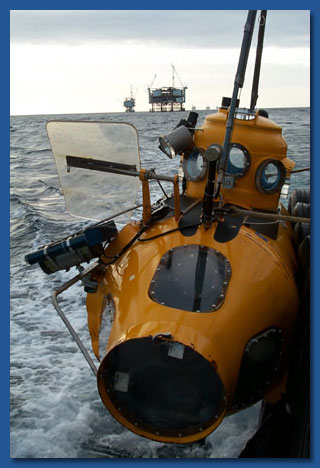 Since 1995, we have conducted fish surveys around the oil and gas platforms of California. The Biological Resources Division of the U. S. Geological Survey, Minerals Management Service and the California Artificial Reef Enhancement Program has funded this work.

Platforms are interesting places. Underwater, they are covered in invertebrates of many species and they usually harbor large numbers of fishes. It is difficult to generalize about what fishes live around platforms; each structure harbors a somewhat unique assemblage. However, if someone held a sharp object to one of our sensitive areas and demanded that we do so, here is what we would say. First, there are three distinct fish assemblages around most of the offshore platforms in the Santa Barbara Channel and Santa Maria Basin. The middle of the water column tends to act as a nursery ground for juvenile rockfishes, as well as blacksmith, painted greenling and a few other species. The platform bottoms are homes to more rockfishes, primarily adults of a wide number of species, as well as lingcod, combfishes and other forms. And the shell mound that surrounds platforms is home to yet more rockfishes, often the juveniles of the species found at the platform bottom, as well as a motley assortment of lingcod, painted greenling, gobies, a few species of flatfishes, combfishes and the like.

On this site, we have placed some video of what we see around platforms. Most of the video was taken from the research submarine Delta, some was acquired during scuba surveys or on other dives. You can access these videos either by clicking on the list below or by clicking on the colored platform names in the map below.

The submersible videos are of two types. First, there are clips from the taped surveys we conduct. These are from an externally mounted hi-8 camera and you can identify them because they have data (including date, depth, and water temperature) superimposed on the screen. You can hear us calling out the names of the fishes, often in a curious mixture of common and scientific names, as well as giving each fish’s approximate length, in centimeters. Hence, when you hear “red, 20”, we are referring to the vermilion rockfish (colloquially called “red snapper”) and its length of 20 centimeters.

The second clip type comes from a digital video camera that we place next to a port, sometimes while we are running surveys or when we see something cool to film. In general, when you click on an icon below we will give you a small amount of background explaining where the clip was taken and what is on it.

In order to view the video clips, you must have QuickTime™ 5.0 installed on your computer, and the QuickTime™ Plugin installed in your web browser's plug-ins folder. Click on the "Get QuickTime™" Link below to install QuickTime™ if you don't already have it. We should note that these tapes are best viewed on a higher speed system. For those of you with 56K or lower modems, these images are going to look a bit chunky. 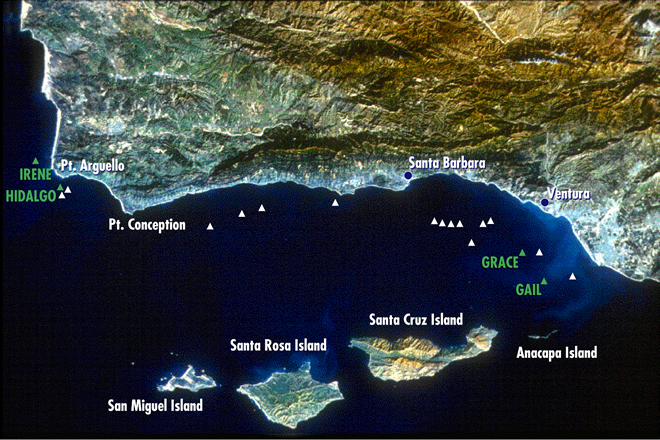 Satellite imagery illustrating locations of platforms. Single click on a platform to see video from that dive.